Live well for less: Do it at WalletPop

Original GRAW goodness for only $20

This week Circuit City is hastily clearancing out a few popular video game titles, selling the original Xbox 360 version of GRAW for $19.99. Yes sir, $20 will get you one of the prettiest looking advanced war fighting games this side of the moon. Even if you're not a huge fan of war-style games, GRAW at $20 is a great "try me" price for anyone sitting on the fence. And if you are sitting on the fence ... why? Fence sitting results in 280 deaths a year, just get down and go buy GRAW already.

Those are the lamest achievements ever

The hip and trendy kids over at G4's The Feed put together a list of what they think are the 17 lamest Xbox 360 achievements to date. Horrible games like Bomberman Act Zero and NBA Live '07 made the list as well as our favorites like Gears of War and Rainbow Six Vegas. We agree with most of their picks, but really agree with hating NBA Live's "Online With 1,000 People", GRAW's "Committed (Multiplayer)" and FFXI's ridiculous "Reach Level 75 with each character class". We guess this article made us further realize that there are truly lame achievements out there and that we have to be careful. Remember, friends don't let friends spend days on end trying to earn lame achievements. It's one epidemic that we can stop.

Yes, we are a little slow on reporting this, but better late than never right? Gamertag Radio found out that in the April issue of Official Xbox Magazine you'll be pleased to find that the Chapter 2 content for GRAW will be included on the demo disc. True, the magazine does cost $10, but if you're a regular subscriber or are a religious purchaser, then all the better. If you remember, the Chapter 2 content was originally released to on the XBLM for a whopping 1200 Microsoft Points, but was recently discounted to a more reasonable 600 Points. So, if you play GRAW, buy the April issue of OXM, haven't purchased the Chapter 2 content, and won't be purchasing GRAW 2 ... then it'll be like Christmas all over again, but in March.

[Via Joystiq, Thanks, to everyone who sent this in]

GRAW Chapter 2 expansion is now 1/2 off

When Ghost Recon Advanced Warfighter's expansion pack came out on the XBLM there was a little uproar from the fans. Not due to the luscious content it held, oh no, but because the download cost a whopping 1200 Microsoft Points! But today Ubisoft announced that the Chapter 2 expansion pack has been discounted to a more reasonable 600 Microsoft Points. Go download the expansion pack for the new uber low price and if you already purchased it for 1200 ... that kind of sucks. Maybe Ubisoft will be nice next time and not gouge their loyal fans who ate up the content right away.


Some brand spanking new trailers were unveiled at the Spike Video Game Awards last night. It's a good thing that somebody was actually watching the show, otherwise we never would have known about these new trailers for Ghost Recon: Advanced Warfighter 2 and Bioshock. GRAW 2 is of course the highly anticipated sequel to GRAW (perhaps you've heard of it). Bioshock is the spiritual successor to the System Shock series and contains some very, very freaky environments and monsters. The GRAW 2 trailer is embedded above, and the Bioshock trailer is (appropriately) embedded below the break. (Underwater humor, get it? ... oh, never mind.)

Wait ... what's up with GRAW's achievements?

After snooping around Xbox 360 Achievements we found one game's achievements to be rather interesting. Ghost Recon Advanced Warfighter has been out for a long time and now it has just came to our attention that its achievement point totals are extremely odd. Take a look at the whole list of them, notice anything a little weird? If you look closely you'll notice that there are achievements that award you Gamerscore points listed at 2, 8, 16, 24, 28 and 32. We've never seen any games offer such odd Gamerscore point totals, usually they are in increments of five, never being as odd as these. Are we missing something here or are there other games out with such odd Gamerscore point totals attached to achievements? Microsoft, don't let them do this to our nice rounded multiples of five ... it's just not right.

We got a great deal for all the Canadian readers in Xbox 360 Fanboy land. Future Shop (the "it" electronics retailer in Canada) is offering an irresistible Xbox 360 bundle. What's included is a premium Xbox 360, G.R.A.W, XBL Arcade: Unplugged, Ridge Racer 6, and our little gem Gears of War. The price is pretty nice and may make you want to slap yourself and call your pet salamander Sally. You get everything for the low, low Canadian price of $449.99. Better than playing hockey in the Summer and is just an all around good deal isn't it, eih?

GRAW / XBLA Bundle on the way?

That's a great deal. But Club Skill doesn't reveal their source or offer any proof. File this under "wishful thinking" until we get official confirmation. Nice idea though. While we're talking fantasy bundles, why not throw in Oblivion and a 12 month subscription to XBL? 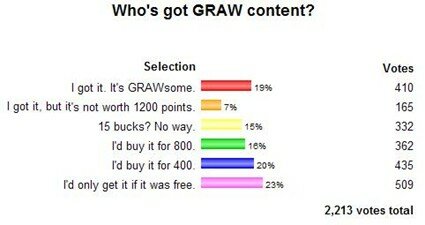 The results of last Sunday's GRAW poll are in. A full 26% percent of those polled have already downloaded the new GRAW content. While a majority of those players seem to be happy with the purchase, just over a quarter feel that the content wasn't worth the money. Comparing those who've already purchased it with those who'd only get it for free, it's pretty close with 575 votes and 509 votes respectively.

Looking at the overall results, it seems that the sweetspot for content downloads is somewhere between free and $5 US. Still, a quarter of GRAW players are willing to shell out 15 bucks, and another third are willing to pay 5 or 10. That means 60% of those polled are willing to pay something. That's a pretty clear message for would be content providers.

Remember folks, you vote with your dollars...er...points. Judging by these results, Ubisoft didn't quite hit the nail on the head, but they made out pretty well.

What do you think? 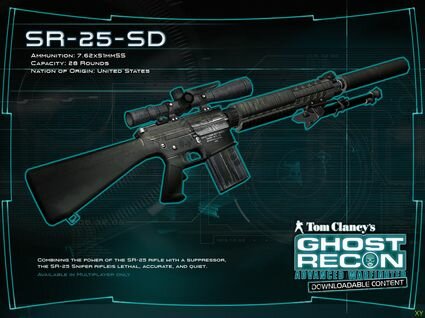 Some of you may have noticed the rather vocal response to the news that new Ghost Recon content costs 1200 points. Most responses went to the tune of "Kiss my ass." Some have bitched and moaned, others gladly opened their wallets, and one person actually burst into flames. So, now that the content has hit, bringing with it the first signs of the apocalypse, the question is: did you get it? We'll take a look at these numbers next week.

Basic poll stuff: don't vote if you don't have XBL and a copy of GRAW. And yes, you could spam the poll and throw off the results, but then you'd be a stupid jerk. You're not a stupid jerk, are you?

Update 1: this poll is now closed. Check out the results here.

That low, droning whine you hear is the predictable response to the price of the Ghost Recon: Advanced Warfighter's Chapter 2 Expansion pack, now available for download on Marketplace. Here's what you get for 1200 MS Points:
Holy crap! 1200 MS Points! That's  171.75 Pesos, 576.453 Thai Baht or $15 American Dollars, the most expensive downloadable content we've seen so far.  I think your level of acceptance/disgust with Ubisoft's Ghost gouging depends on whether you convince yourself this content is a true expansion pack ( the kind you used to pay $20 or $30 on an old-fashioned disc) or glorified horse armour. Team Xbox's hands-on will help you make up your mind. Of course, some people over at Major Nelson's complaint repository already have. Sample quote:

How many people will be shelling out for this relatively expensive expansion? Also, can somebody tell me what the PC people are getting for free?

Chileans get their 360 on 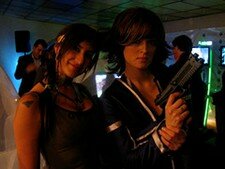 Still don't have an Xbox 360? Do you live in Chile? Then you're in luck my friend! The curvy white box hit store shelves in Chile last week, inspiring these ladies to impersonate protagonists from mediocre launch titles. Just for a moment, recall how disappointed you were when you played Perfect Dark Zero for the first time. Let that sink in for a second. That is what it's like to be a 360 fan in Chile right now. At least they have access to the best launch title, right?

Good lord, can you imagine having to wait 5 months for GRAW and Oblivion again?

Xboxyde has scored a handful of screenshots from the upcoming GRAW XBL content. The screens feature some of the new co-op campaign maps as well as some new equipment. The content will be released later this month and features "12 additional maps designed for Live multiplayer play, four new missions that extend the co-op campaign through Nicaragua, new game types (Team Blind Siege and Team Battle), more camouflage customisation options and five new weapons." Xboxyde also mentions that they are accepting questions for an upcoming interview with the GRAW team. If you have any burning questions for the team, you may submit them in the Xboxyde forum. If anything else is burning, I'd suggest you see a doctor.

[update: removed (sic) from 'customisation' on account of it being the Queen's English.]

New GRAW DLC to be unveiled at E3 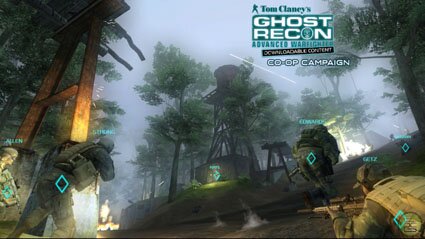 Ubisoft says new Ghost Recon: Advanced Warfighter downloadable content, rumored to included new multiplayer maps and a co-op level, will be playabe at their E3 booth. No word on when it will be available on XBLM.