Let it be known that we don't ignore positive Sony news at 360Fanboy: Recall last week's announcement that EA will grace the PS3 with an upgraded version of Fight Night: Round 3 including a first-person mode, ESPN integration, and some minor graphical polish. When I first heard this, I was annoyed that there are no plans to release this stuff as downloadable content on XBLM. Then I realized, by the time Joe Average gets his hands on PS3, we'll likely be enjoying Fight Night Round 4. Still, it's nice that PS3 fanboys have something to cling to in their hour of need. Maybe EA should throw in some 1080p Burger King ads to really spread the cheer.

Overheard at the family BBQ: "Oh my God, it's huge!" 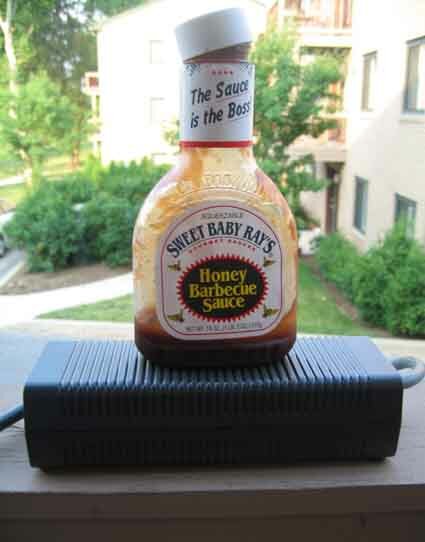 The family Memorial Day weekend BBQ was the first time my non-gamer geek relatives got a chance to spend some quality in-door air-conditioned time with my Xbox 360. Comments ranged from my Mother's horror at the realistic blood and Burger King ads in FNR:3 to group frustration with Geometry Wars (still too intimidating for the most casual, even after several Coronas). Best line of the the day:

In reference to El Jefe, otherwise known as the the 360 power supply.

Team Xbox forum member Xpoc decided to make the most mismatched fight he could in Fight Night Round 3. Using the character creation tool, he managed to create the scene pictured to the left; a sort of next-gen variation of Punch Out's diminutive Little Mac going mano a mano with King Hippo.

The image to the right, of Russian giant Nikolai Valuev getting annoyed with John Ruiz, is a reminder that life often imitates art. Who booked that fight anyways... Doc Louis?

Boxing fans looking to re-enact Shane Mosley’s Saturday night beat down of formerly “Ferocious” Fernando Vargas were likely disappointed to learn (or at least be reminded) that Sugar Shane failed to make the Fight Night Round 3  roster after lacing up virtual leather in the two previous games. Then again, Vargas hasn’t shown his battered mug in any of the Fight Nights, leading one to wonder: just how badly does a man’s face have to get pummeled before the video game gods throw him a bone? (For those who didn’t shell out for the pay-per-view, Mosley won a hard-fought TKO that left Fernando looking like the Mexican Elephant Man).

Granted, create-a-boxer can go a long away in patient hands, as evidenced by this home-brew ear-chewer. Sure, the financially shady nature of the sport makes licensing difficult and numerous omissions inevitable.  Mosley could be missing due to his own greed and fading marquee. That said, when an otherwise quality  title’s “coolest” unlockable is a…Burger King ad, every unrendered tomato-can grates on the nerves. Hey EA, Don King belongs in a boxing game. The Burger King does not. Oh, and if you suddenly felt the urge to “Grab Life By The Horns” while pitting Hagler against Hearns, credit the smooth 30 DLPS (That’s Dodge Logos Per Second) for delivering a subliminal knock-out.

I understand the economics at play here. Maybe we could have had George Foreman if they stuck a Meineke muffler up his ass to off-set costs. But boxing is one of my favorite sports and Fight Night Round 3 is thus far my favorite 360 game. Here’s to the irrational dream that  the next $60 installment includes more pugilists and less plastic-head product placements.